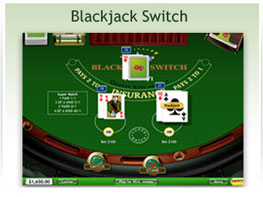 Blackjack Switch is the only Blackjack variant where a player has luxury to cheat with the card swap rule. Mostly played in Playtech casinos, Blackjack

Switch is more fun than the classic Blackjack version.

Blackjack switch is a lot different from normal Blackjack, as in this game when a dealer gets a hand of 22 instead of calling it a Bust the hand is called Push against the player’s hand. The exception to this rule is when the player’s hand is a Blackjack.

A major winning tip in Blackjack switch is to Hit whenever the player has a hand that totals eight or less than eight. Also if the hand consists of one card as ace and other card totaling four or less, a hit is a good idea. The tip for Standing includes a hand that totals 17 or a hand with one card as ace and other totaling eight or less than eight.