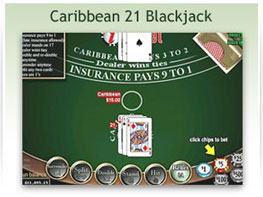 Caribbean 21 is a blackjack variant introduced by one of the major gaming software, Real Time Gaming (RTG). Played with 8 decks of 52 cards in each, Caribbean 21 is played with the basic goal of getting a hand nearest to 21 and not more than that.

Players in Caribbean 21 are given the liberty to split any two cards as well as to hit and redouble in a game, even after doubling.

The card values in Caribbean 21 is similar to that in a classic blackjack game, ad number cards have their face values and face cards and tens are calculated as ten. One major difference is that in this Blackjack variant, Aces are always a hard card of one and are never taken as soft 11.

Splitting rule sin Caribbean 21 is quite flexible and allows players to turn odds towards them. The house edge in a carefully played game is always 0.19%. Players can split the first two cards and turn the game towards them. By simply understanding the splitting rules and conditions, player can make Caribbean 21 a simple and easy game to play.