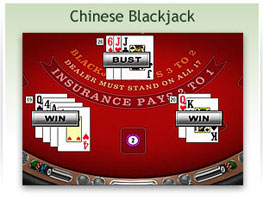 Chinese Blackjack, also known as 21-point or ban-luck(Hokkien) is a game played in South-East Asia. The game is more exciting version of the famous casino game Blackjack. Although the game is similar to the traditional Blackjack but there are some salient features that differentiate the game from Blackjack. In the beginning of the game the player acts a dealer as he starts with shuffle and cut. The player with 5 cards get some special advantage.

In Chinese Blackjack the values of the cards remain the same except the Aces which may vary according to the hand value of the players. If a player has a pair of Aces, he has Ban Ban. The player with this hand gets a payout 3 to 1 from the dealer. Exception is in the situation that the dealer also gets Ban-Ban then its a tie or escape hand or free hand. If the dealer gets a Ban-Ban then he gets a payout 3 to 1 from all the players.

Ban-nag is also called Ban-Luck. If a player has a face-up card or a ten valued card along with an Ace then he has a Ban-nag. Ban-Nag is same as Blackjack in a traditional Blackjack game. Player with Ban-Nag is payed 2 to 1 by the dealer. The outcome can be different in the exception that is if the dealer also has a Ban-Nag or a free hand. If the dealer gets a Ban-nag then he gets a payout 2 to 1 from all the players.

Escape or free hand is when the player gets a score of 15 points. The player has a choice of stopping the game or to go on playing. If the player stops the game then the cards are reshuffled and dealt again. The players and the dealers have a choice to use this option as there is no compulsion.