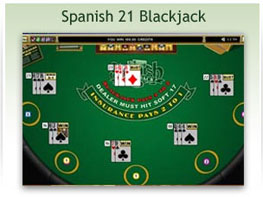 Spanish 21 is a Blackjack variant played with a Spanish card deck which does not includes tens. This fast-paced Blackjack game is popular as Pontoon in Malaysia and Australia. Spanish 21, like every other variant, is played with the basic blackjack objective of beating the dealer’s hand by creating a hand that totals 21 or closer to 21.

Although, the objective is the same Spanish 21 differs in many ways when compared to the classic Blackjack. Most of the difference lies in the game rules which include the card deck, as well as situations like Hit, Stand, Surrender, Double Down, Insurance and more.

Fact that this Blackjack game is played with around 6 to 8 Spanish decks, which includes 48 cards per deck due to the exclusion of cards of tens from each deck, also means that house edge is higher and odds are in the favor of the dealer’s side. To makeup for the absence of tens and higher house edge, Spanish 21 offers more favorable rules to players including better bonuses.

Similarly, a hand of 21 with a card combination of 6-7-8 in mixed suit, spades and same suit receives a payout of 3:2, 3:1 and 2:1, respectively. But theses bonuses are limited to hands that have not been doubled down or split.

Card counting is quite effective in this blackjack variant, even with the absence of ten cards. In Spanish 21, occurrence of card that favor a player, such as Aces, is higher. For example, aces will occur in proportion of 1/12 rather than 1/13.