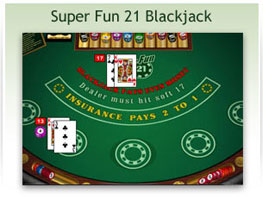 Super Fun 21 is a variant of Blackjack with innovative rules which makes the game more exciting and fascinating. It is important for the player to know how to play a traditional Blackjack as the basic rules of all the variants are dependent on the standard game. The objective of this game is similar to the traditional Blackjack that is the player needs to beat the dealer by getting a hand value closest to 21 without busting. There are some variations in the rules of this game which makes it more interesting to play.

The most fascinating part of Super Fun 21 is that the rules of the game are simple and easy making it relaxing for the player to play. The players who are looking for fun can always enjoy this game. Some of the rules that make Super Fun 21 different from the regular Blackjack game are-

Super Fun 21 offers a great advantage to the professional card counters that they can manipulate their bets according to the counts. A player has high chances of scoring a 21 point hand with 5 or more cards when the deck has lot of low cards. On the contrary if the player can get a Blackjack if the deck is having lot of high cards. It is advisable to the players to take the “Double Down Rescue” advantage in which they can surrender after doubling down.

The players can double down on 9 against 2 through 6 or on 10 or 11 against all up cards. It is advisable that the players when doubling down should surrender with 16 or below only if the dealer has 8,9,10 or Ace.