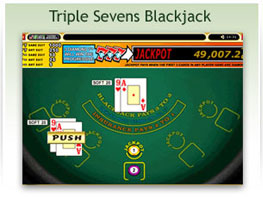 Triple Sevens is basically a progressive jackpot with rules different from the regular Blackjack game. Since the game is played with 5 standard card decks, there are five cards for each suit which makes it possible for a player to create a hand with three 7s of diamond.

When a player creates a hand that has three sevens of diamond suits, he wins a huge progressive jackpot. The rules for progressive jackpot payout differ according to the hand and suits. A hand with triple sevens of same suit earns 1000 credits, whereas a hand of triple sevens with different suits earns 250 credits. Similarly, if the created hand has two sevens of same suits, the player gets 50 credits and if the two sevens are of different suits the credit earned is 7.

Triple Sevens offers an advantage to players as the dealer’s cards are open to all. It is important to remember that players are allowed to double only on numbers from 9 to 11. Player should avoid splitting sevens as this could eliminate bonuses.