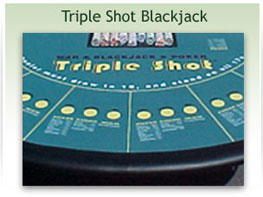 The growing trend of online gambling among the payers has lead to origination of many new gambling games. The players can enjoy these new games online with the help of the internet. Triple shot is similar to the games like Tripoley and Three way Action and is played with a single 52-card deck. Triple Shot Blackjack is an amalgamation of three casino games War, Blackjack and Poker which have different betting limits so it is important for the player to check the details before beginning the game. The players do not require to play all three games but they need to play at least two of them.

Triple shot involves many players so each player gets one card. For beginning a game two cards are dealt, one is given to the dealer and other to the player. The three games are played independently so the player can bet any amount on each game. Some of the rules that needs to be considered are-

The player and the dealer both get one card each. After all the players and dealer have their cards face up the value of the cards is compared and the one with the highest value wins the bet. But in case its a push or tie then the player has to loose half of his money. The house advantage on this stage of the game is 2.94%.

The dealer offers second card to the players. Now the players play for the blackjack and the dealer has his one card face up and other face down. The players try to get close to 21 and get higher score then the dealer without busting. Blackjack payout is 3:2. If the player gets six cards without busting then he tends to win the game automatically and this is called a 6 card charlie. A player while taking cards in should keep in mind that these cards will be useful for them in 6- card poker hand. A player can loose a chance to win something better in the game.

Any player having cards less than 6 receives more cards from the dealer. The dealer also takes more cards to equal six. The aim of this game is to have the best poker hand. The house advantage at this stage of the game is in between 3.20% to 5.78%